skip to main | skip to sidebar

Will He or Won't he Brett Everyone Wants To Know 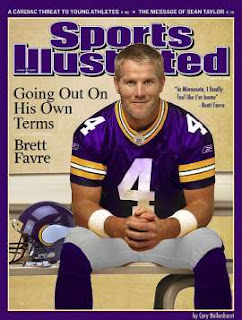 It seems Brett Favre and the Minnesota Vikings story just will not end and Yahoo Sports who reporting Brett won't play may have to change that story. It all hings on his shoulder that he injured last year with the New york Jets. Favre's throwing arm appears to be a pivotal factor in whether he comes out of retirement to play for the Minnesota Vikings. A source close to the situation told ESPN's Jeremy Schaap on Friday that X-rays of Favre's right shoulder -- he has pain resulting from a torn biceps tendon -- have been sent to the Vikings and that the X-rays are in the process of being evaluated. If it is determined by Favre's and the Vikings' medical people that he needs anything less than "major" surgery on his shoulder, Favre will unretire to play for the Vikings, the source said.

Now I love Brett Favre, but this story is getting plain silly. I mean either say your going to play or just stay retired as many Viking fans want to know what is going on. No matter what happens everyone will still be on edge until something is finally decided.
Posted by Kenneth Watkins at 7:55 PM